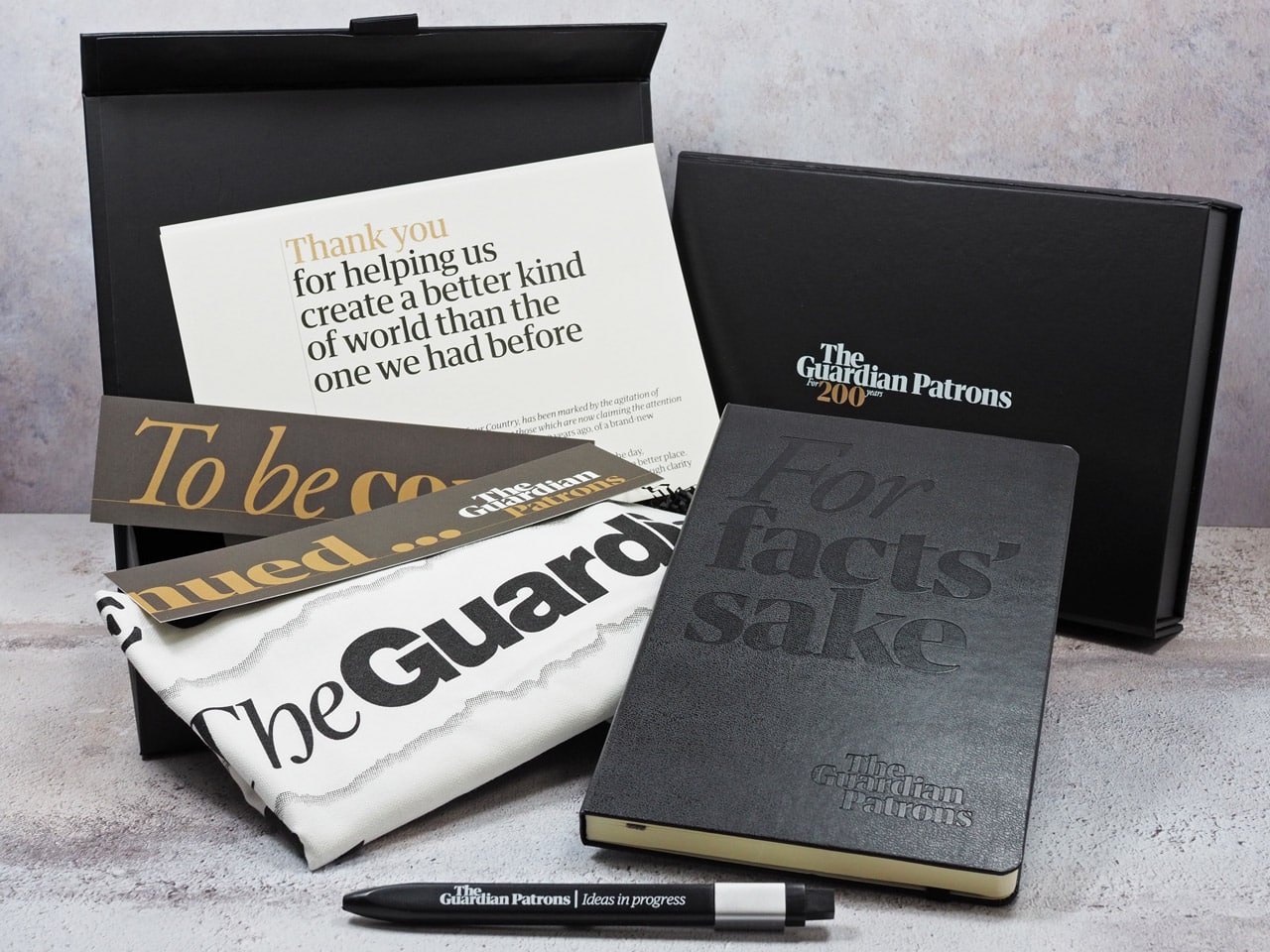 Patron gift sets: the perfect way to say “thanks!”

News is all around us. Whether we’re browsing the web, switching on the TV or chatting over a coffee in our local haunt, the news finds its way into our routine on a daily basis. It’s instantaneous, accessible, and significant to our daily lives, but at times it can be misleading, rooted in bias, and all in all, fake.

For The Guardian, truth-telling has always been at the heart of what they do, and it’s why they’ve been a trusted source of news for 200 years. With a growing proportion of their revenue coming from their readers, the newspaper has strived to ensure that their journalism is free from commercial or political interference, remaining trustworthy in a world where politics and money are key influencers.

And it’s especially thanks to their patrons that The Guardian has been able to put the public at the forefront of their journalism. Their pivotal 200th anniversary in May 2021 was the perfect time to say thank you to those patrons, and for The Guardian, a unique gift set seemed just perfect.

In the words of Victoria Durant, Head of Patrons:

“Patrons are unique supporters of The Guardian and we wanted to show our gratitude and acknowledge that support as part of our 200th anniversary celebrations in 2021. The pack was a really special thing to arrive to patrons across the world that are keepsakes as well as practical items, which was important to us.”

We were approached by The Guardian’s in-house marketing agency Oliver, who were looking to order branded Moleskine notebooks from us. Initially intending to source all elements of the set from different suppliers, once Oliver found out that we could produce the entire gift set and mail them out to individual addresses around the world, they handed the entire project over to us.

For the Guardian, reputation is everything, and it was therefore vital to becoming their supplier that we adhered to their sustainability and social responsibility policies. We were able to demonstrate to the stringent Guardian procurement team that we, and all products within the patrons gift set, would be fully compliant with these important standards.

When the patrons opened the parcel that had been delivered to them at home, they were met with a sleek, black gift box, branded with a UV digital print of the title “The Guardian Patrons For 200 Years” in white and gold, creating the intended celebratory feel. Upon opening the lid, recipients were first greeted with a letter thanking them for their support. Underneath the letter were a number of branded gifts, featuring elements of the 200th anniversary campaign throughout. 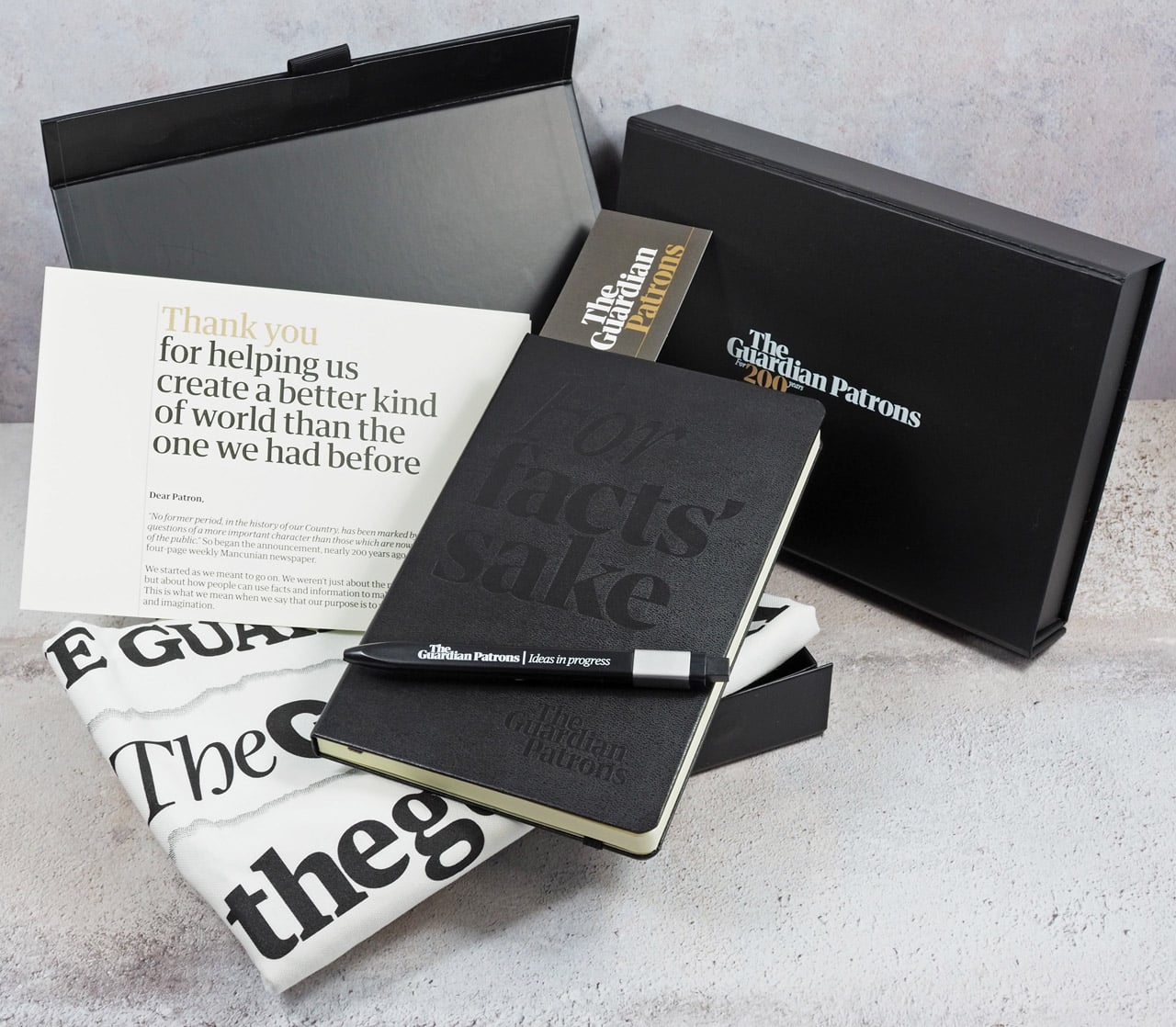 The first practical keepsake inside the patron gift sets was a tea towel printed with the Guardian mastheads over the last two hundred years. Upon lifting that out, they came across the key Moleskine products, the prominent part of the set. Moleskine is rich with cultural history, being a favourite with the greatest thinkers and creatives of our time, making it the perfect brand to represent the Guardian. 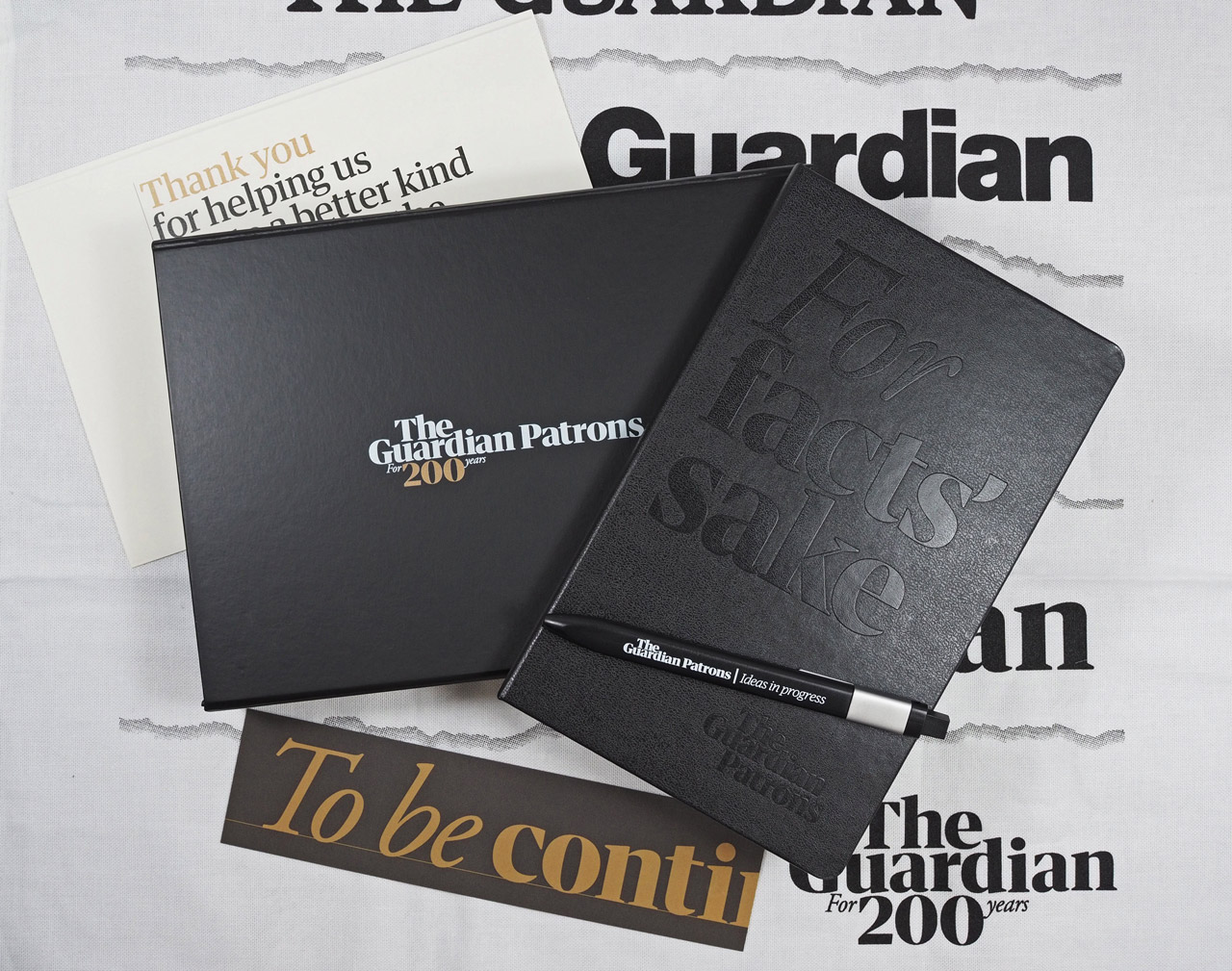 A branded Moleskine notebook debossed with “For facts’ sake”, was the star of the patron gift set, and a custom bookmark sat with it, displaying the slogan, “To be continued…”, which featured on billboards around the UK and on the Guardian’s digital platforms. Paired with the notebook was a black Moleskine pen with a white UV digital print of the phrase “The Guardian Patrons | Ideas in progress”. 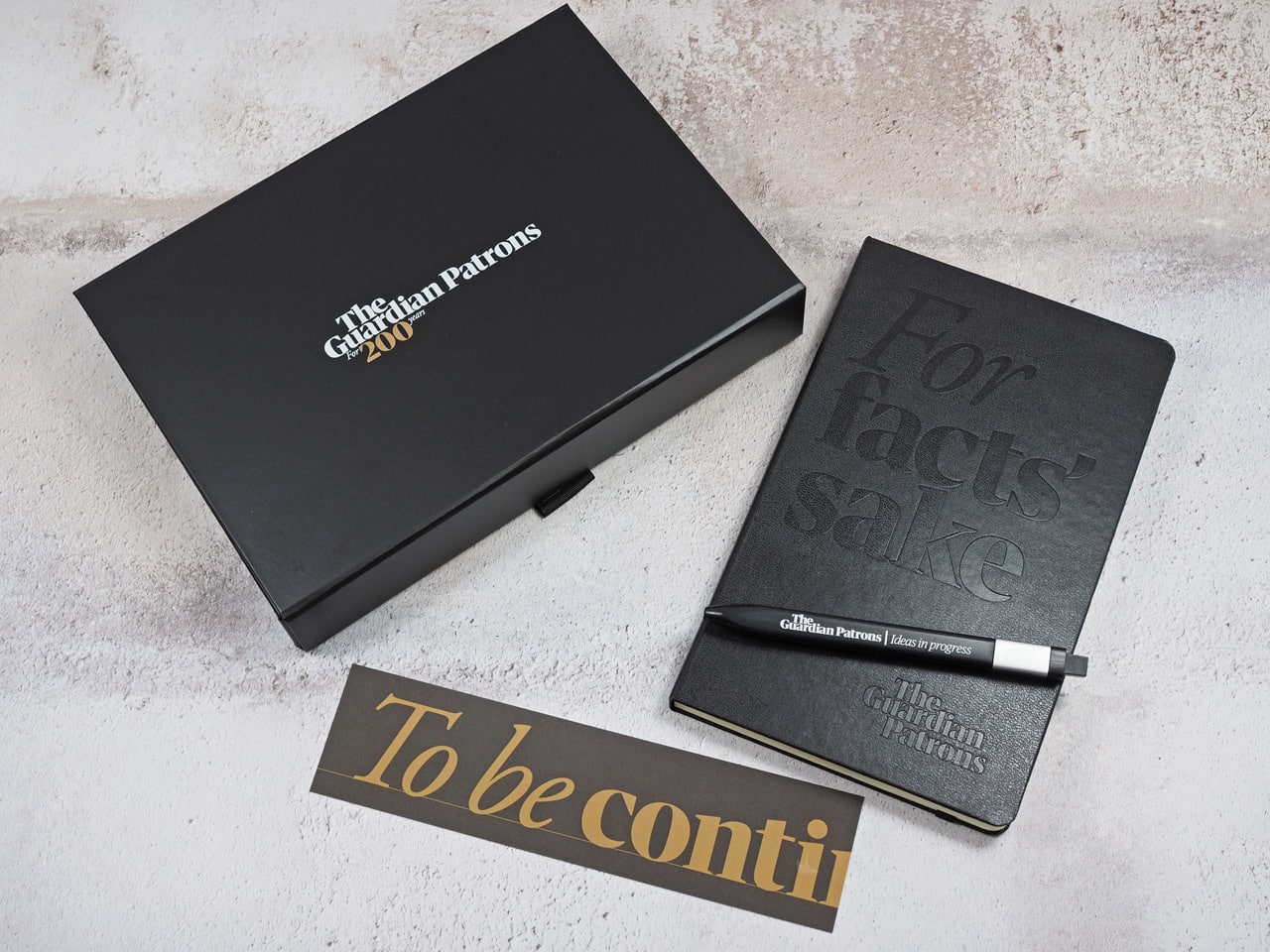 When it comes to saying thanks, nothing beats a good quality gift set, as the feedback from The Guardian shows:

“Thank you! Just want to say that we’ve received lots and lots of absolutely lovely feedback from patrons so far and it’s been really heart-warming. My pack arrived today and they are so beautifully presented so thank you and the team so much.”

Looking for patron gift sets to say thanks to the supporters of your business?

Call +44 (0)1303 720700 to speak to one of our knowledgable sales advisors for some friendly advice, or hit the ‘get a quote’ button at the top right of this page to send us your enquiry.