The look and feel (and endless possibilities) of a brand-new notebook: surely among life’s great pleasures for today’s dreamers, thinkers, planners and creators? Especially if the item in your hands is from the iconic Moleskine brand. Simple, distinctive and a key part of Moleskine history, the original black notebook played a crucial role in the building of a legendary brand. But the Moleskine story is not quite as uncomplicated as its most famous product…

From the studios of Paris…

Pocket-sized notebooks or carnets, covered in leather or oilskin, were first sold by 19th-century Parisian stationers and used by artists and authors such as Van Gogh, Picasso and Hemingway.

But it was a British writer and notebook-lover, Bruce Chatwin, who was the first to put the now-famous name onto the printed page – and into Moleskine history. In his 1987 book, The Songlines, Chatwin described making “…three neat stacks of my ‘Paris’ notebooks. In France, these notebooks are known as carnets Moleskines: ‘Moleskine’, in this case, being its black oilcloth binding. Each time I went to Paris, I would buy a fresh supply […]”

Chatwin’s notebooks were made by a small family business in the French town of Tours. When he tried to order more (a hundred, he calculated, should last the rest of his life) he discovered the owner had died – and the business was no more.

…to the bookshops of Milan

In 1994, the small Italian design company Modo & Modo asked Maria Sebregondi to create products for a new generation of travellers who were keen to explore the possibilities of the post-Cold-War era of freedom and adventure.

The company had already begun to publish a line of books on travel and culture, and was thinking about T-shirts with literary slogans – but Sebregondi was looking for something rather more substantial.

The following year, she read Chatwin’s book and remembered buying the same type of notebook in Paris herself in the early 80’s. Why not recreate something similar for this eager, restless audience, a way for them to record their experiences and impressions, and keep them safe whilst on the move?

The name Moleskine seemed a perfect fit. Its origins in French, firstly as the name for a hard-wearing cotton material with a brushed surface (like a mole’s skin) and then for the leather or oilskin covers of Chatwin’s notebooks, had all the elements of heritage, utility and “the poetry of the streets” that Sebregondi was seeking. Moleskine was registered as a trademark in 1996, and the first notebooks went into production the following year.

Moleskine had found its hero product, the one it would become famous for – the simple black notebook with rounded corners, ribbon bookmark, elastic page-holder and expandable rear pocket. “I said, ‘Let’s remake them, beautifully… and we’ll hide in the pocket the story behind them to inspire all those who work using their talent’”, remembered Sebregondi.

It was the first step in the building of a legendary brand, from start-up to global success story. The first Moleskine notebooks flew off the shelves, and, unchanged to this day, they remain the company’s best-seller. 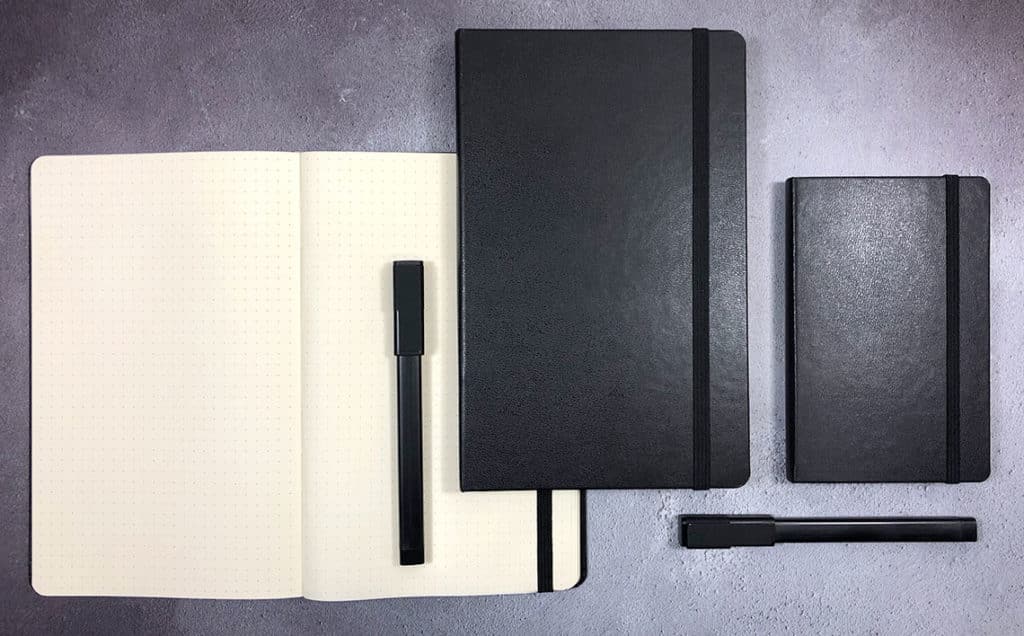 The magic of Moleskine

That first batch of Moleskine notebooks were sold, not in a stationer’s, as you would expect, but from a bookshop, in the company’s home city of Milan. It was a bold move – connecting the Moleskine brand to a lifestyle with knowledge, culture and travel at its heart.

We are all creative beings; it seemed to say, with a book, a poem, or a drawing in us. And a Moleskine notebook is the perfect place to confide our thoughts, ideas and sketches – a book only waiting for us to complete its pages…

It was a touch of marketing magic – but there were many more to come. Although the company was careful never to say that famous writers and artists such as Hemingway, Matisse and Picasso had used these reborn Moleskine notebooks, it made the connection between the avant-garde geniuses and their use of very similar note-taking artefacts, then let the public draw its own conclusions. The Moleskine history was a compelling one, and found a receptive and growing audience, especially in the creative sector.

The Moleskine brand was built with intelligence, flair and great attention to detail. But the company has never marketed its products on the basis of them being the best in their field. Instead, the emphasis has always been on aspiration and lifestyle, on creating objects that are synonymous with “culture, imagination, memory, travel and personal identity… designed for modern people on the go”.

Many of those “modern people” have been happy to spread the word, their love for the products, and what they mean to them. Celebrity users include architect Renzo Piano, designer Ron Arad and Dragon’s Den entrepreneur Deborah Meaden. Young designers Giorgia Lupi, Jon Marshall and Nathan Warkentin are also ardent fans, among countless others.

In a Radio 4 interview Jay Rayner, Observer restaurant critic, musician and broadcaster, produced his soft-covered Moleskine notebook with a flourish. It went everywhere with him in his back pocket, he explained, which was the reason for its pronounced and eye-catching curve…

Once the Moleskine brand was established, the company began to link up with other legendary names, combining to maximise their appeal for the consumer. Limited editions have celebrated Lego, Star Wars, Harry Potter, the Marvel franchise and many more.

Moleskine has kept in step with consumer trends, including those in stationery, firstly adding red notebooks to the classic black and then wider colour ranges, updated each year in line with changes in fashion and design. Its “family of nomadic products” now includes planners, diaries, pens, journals, sketchbooks, bags, and smart tools that link paper-based and digital media.

With travel company Unsettled, Moleskine now provides retreats for those seeking new experiences and inspiration. And it has opened cafés in Milan, Beijing, Geneva and Hamburg. Its marketing has been clever and consistent – a work of genius in its own right.

Moleskine’s attraction for creatives and notebook fans was undeniable, and a crucial part of its success, but it wasn’t content to be just another niche brand, susceptible to changing tastes and fashions. The company needed a stronger, wider customer base, and that meant introducing its products to people who didn’t know them.

So Moleskine’s final step in building its legendary brand was to approach the corporate world, but without compromising the ideas and qualities associated with its name. And the corporate world was captivated. With their own customised Moleskine notebooks, businesses can promote themselves with style, creativity and imagination, while branded Moleskine notebooks provide the perfect setting for company logos and other marketing messages, making it a perfect option for companies looking to satisfy their branding vision with the attached quality and prestige.

Moleskine’s reputation and unique position in the creative sector makes personalised Moleskine notebooks the ideal way for businesses to show how much they value their clients and team. It says to those people that they’re smart and interesting, and their thoughts and ideas are worth capturing in a special and unique way.

So why not use the power and possibilities of Moleskine to promote your brand? Noted in Style can help you find the best way to link to the ethos that has found a place in the hearts and minds of so many creative people – and find your own place in Moleskine history.